Dear customers, dear visitors, we are back after the Easter holidays within the opening hours for you. Due to the fact that we received many enquiries during the holiday period and would like to answer them as quickly as possible, we kindly ask you to use the contact form for contact purposes. Thank you. 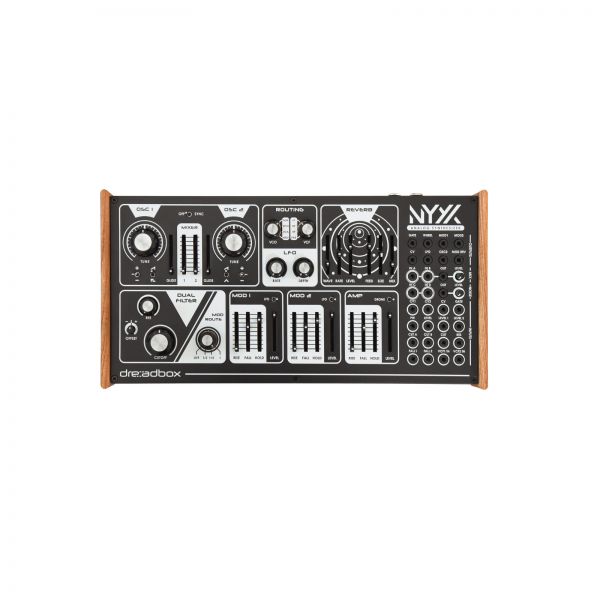 Named after the Greek goddess of the night, the original Nyx already convinced with a fresh concept and the unique, spherical sound.

With Nyx V2, the Greek boutique manufacturer based its design and form factor on the highly praised Erebus V3, which allows for a much more intuitive and, thanks to the total of 30 patch points, more flexible playing and even more complex integration into Eurorack systems. The powerful oscillators known from its predecessor can be flexibly routed and tuned, which, together with the dual VCF (LP, HP, BP & PAR), which can also be routed independently of each other, allows endless sound design possibilities.

Another highlight of the Nyx V2 is the extraordinary reverb based on the Splash Mk3 from Crazy Tube Circuits. The reverb effect, which ranges from dark, ambient drone sounds to epic leads à la Blade Runner, has been given four additional controls, making it much more than a simple effect, but a fixed component that makes up the characteristic sound of the handmade desktop synthesizer.

On the rear panel, Nyx V2 offers a Line Out, Phones Out, Midi In & Thru, as well as a series of dip switches for adjusting the Midi channel and switching between Unison and Duophone mode.