Welcome to MusoTec !
We wish you a good start into the new year 2021. We are back for you again.

Attention! Due to a problem at the internet provider, we are currently only reachable via e-mail! 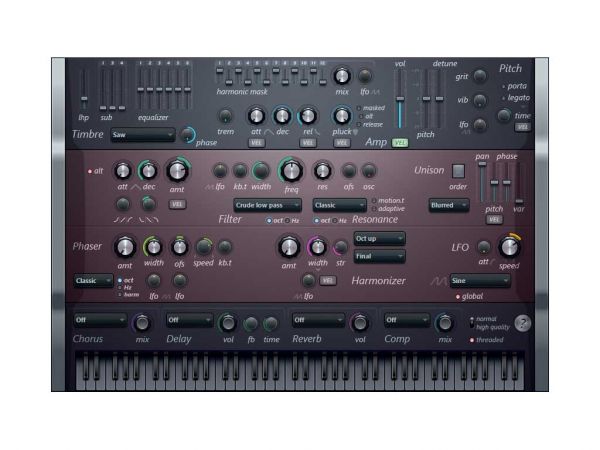 Not just another subtractive synth....

You may ask: why?
For several reasons. To begin with, there are too many subtractive synthesizers already, often bragging about being virtual analog. This one is digital, and proud to be. Everything is fake, the tone generator, the filter & its resonance, the phaser, all performed on the harmonics, before partials are computed.

Now, how it's synthesized shouldn't matter after all, if the result sounds subtractive. But Harmless is more than a proof of concept, it allows fine control that wouldn't be possible through classic subtractive synthesis. Filtering and phasing can be assigned unusual shapes & slopes, something normally only possible through offline digital filters. Filter slopes can even be defined in Hz instead of octaves. Finally, you get control on each partial's frequency, creating timbres definitely impossible using common synthesis methods.

Again, Harmless is additive doing subtractive. Harmonics are not produced to be filtered, the timbre is filtered before being generated. This may sound like a detail, but generating sounds this way offers a lot more advantages than drawbacks.

Powered by a highly optimized, multithreaded additive engine, CPU usage is comparable to the one of traditional subtractive synthesizers, especially for low-passed timbres. Voices may be generating hundreds of harmonics in parallel and still not overload the CPU.

Because less is more

Harmless was limited by design. We don't have any problem with complex synthesizers (we made several), but they're not for everyone. Here, no tabs, no hidden controls, no multipoint envelopes, all features are visible at once, and color-grouped. Over 100 parameters, most of which being automatable, are laid over a clear GUI.

Harmless, only in appearance

Simpler to program, yet packed with evil features. Under the hood, you will find unique options, like linking the phaser's output to partials frequencies. The LFO section can act as a special modulation source, linking the phaser's width to the velocity, or the pitch to the filter's envelope.

Harmless is also packed with effects, the usual chorus, delay & reverb, but also a multiband compressor/limiter powered by Maximus itself. It also inherited the powerful unison from Sytrus.

In conclusion, our goal was to create a subtractive synthesizer with a unique twist, that also was easy to program, and we believe it succeeded.