after returning from our company vacations, we are available for you again as usual. We look forward to your call or e-mail. 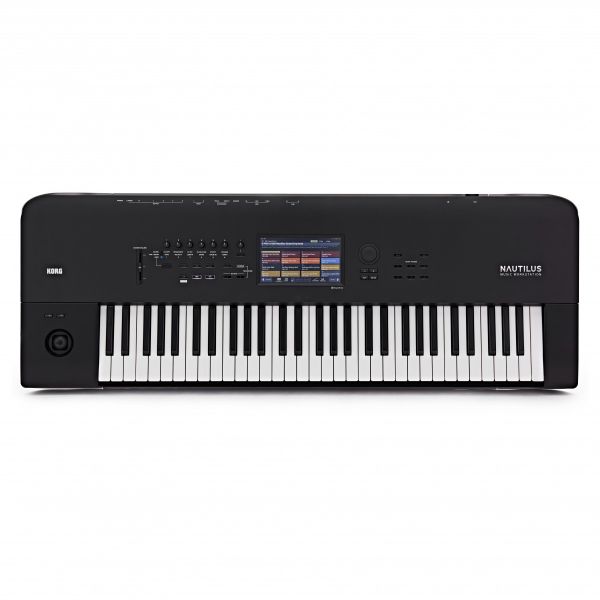 or +49 2595 963 9050
Description Videos 1
Description
With the Nautilus , Korg revisits the idea of what a modern synthesizer workstation... more
Close menu
Korg Nautilus 88 Keys

With the Nautilus, Korg revisits the idea of what a modern synthesizer workstation should be able to do. The fact that most operations are performed on the large, colorful 7" touch screen is quickly made clear by the clearly arranged control panel. Six knobs and buttons each are configurable by the user according to their own needs; depending on the mode, these are predefined and fulfill a fixed task such as setting the arpeggiator or the filter. The velocity-sensitive, lightly weighted keyboard provides a good playing feel. Closely related to this is the Dynamics control, which changes the keyboard's touch response. The range of expressivity is so high that it is sometimes hard to believe that you are still playing the same selected sound. In addition to numerous PCM sounds and drum kits, nine different tone generation models are among the highlights of the Korg Nautilus. Here, the musician is given several in-house classics such as MS-20, CX-3, Polysix and Prophecy, but also high-quality electric piano and grand piano sounds as well as string instruments and cutting-edge synthesizer sounds at hand.

The sound engine of the Nautilus contains nine different tone generation methods, covering just about everything from high-quality pianos and wacky synthesizer sounds to select sounds for orchestral music or the tried-and-true sound requirements for rock and pop. Ex works the instrument is additionally equipped with about 760 MB of PCM sounds, this selection can be expanded by the user up to 2GB. A total of 2560 sounds and 104 drum kits are pre-installed.

Effects can be counted as part of the sound generation; the Korg Nautilus 61 has 16 effect processors that can be used to give your sounds the final touch. The twelve insert effects can be placed with one sound, one combination or even chained to another in the virtual mixer. Further final effects are available to refine the sum. The effects can even be used on the stereo audio input, making Nautilus just as good as a lush effects unit.

With the Open Sampling System, Korg has implemented an uncomplicated way to record samples from external audio sources and process them in the device, even resampling is possible. The maximum sampling time depends on the remaining amount of memory in the PCM Sounds memory or a maximum of 80 minutes in stereo in disc mode. Various sample formats such as AIFF, WAV, SoundFont 2.0 and AKAI S1000/3000 can be loaded via a USB stick. By means of a USB Ethernet adapter, Nautilus can be connected to a computer network, thus significantly speeding up data exchange between the instrument and a computer.

Of course, a comprehensively equipped synthesizer workstation cannot be without a sequencer. 16 note and audio tracks each offer themselves to support the musician in all his actions and to capture ideas. In addition, a new mode for inputting drums has been implemented, which you might know from most drum machines and groove boxes. Like most functions, this can be accessed via the touch display. An extensively adjustable arpeggiator is also on board, which can be applied to any note track. Some controls can be adjusted to your own needs, so that you always have the start/stop button at hand, for example, with a keystroke in the filter menu of a sound or the start/stop button. By the way, the touch display can be set to an eye-friendly night mode. Musicians who are working on different projects at the same time, for example, will appreciate the directly accessible set lists.

Free of charge to the Nautilus, Korg provides a comprehensive software package as download. For changes and runability on Windows and Mac systems, please refer to the Korg homepage.