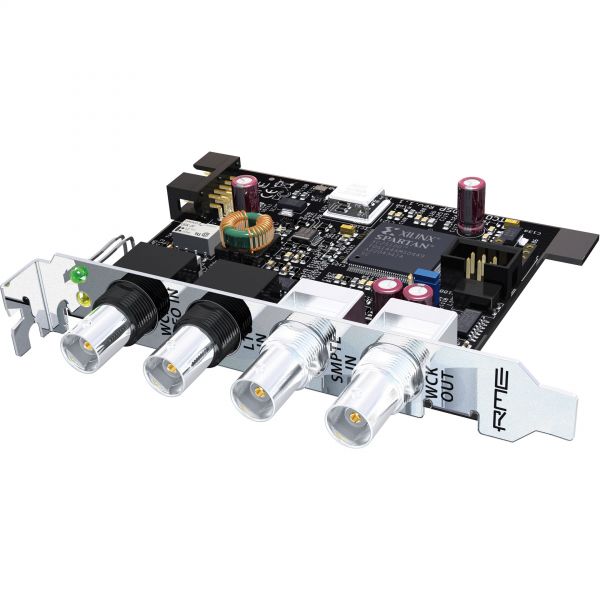 The TCO module is an optional extension for certain RME cards/systems. It is inserted into a free slot of the housing and connected to the motherboard by a narrow ribbon cable.

A TCO can be used with several cards at the same time, provided that a card supporting the TCO is present in the network.

Received time code can be forwarded as APP (ASIO Positioning Protocol) or MTC to audio/video applications. On the other hand, the TCO is also able to generate low-jitter LTC from received APP or MTC signals directly on the hardware level, without interaction by a software or driver routine. Various chase functions (adjustable drop-out length, continuous or jam sync) are supported.

On the hardware side, the TCO has a switchable word clock/video input (BNC, terminatable) and an LTC input (BNC). The two-stage LTC output (BNC) can be configured using jumpers.

All settings can be easily accessed via an additional page in the setup dialog of the HDSP card.

All important functions and status information can be accessed in the clearly arranged dialog page, which appears automatically after installation of the TCO.

Further options include pull-up and pull-down factors ready as well as status indicators (Input State), which provide precise information about the respective signal. For example, for an attached word clock signal, it is displayed whether it is in the Single Speed, Double Speed or Quad Speed range.

Other cards only in Multicard mode.