after our national holiday break, we are back within the business hours for you. We are happy to have a nice conversation with you or to receive a nice e-mail from you. 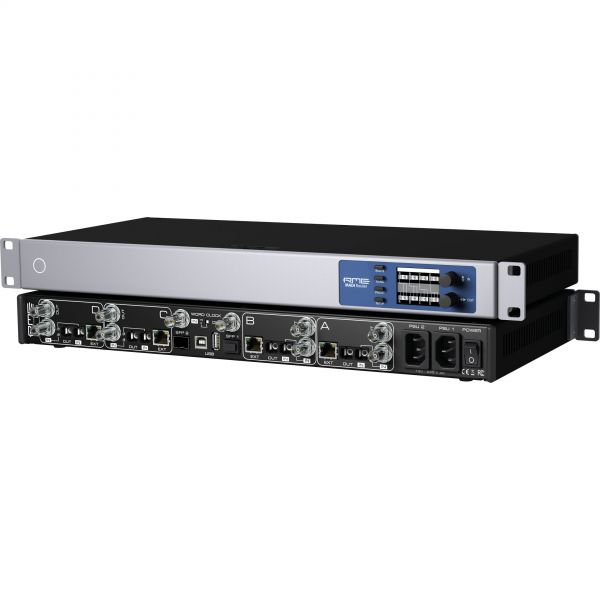 Building on the success of the MADI Bridge and the MADI Converter, RME presents a worthy successor to both devices - in fact far more than a successor, as this device, like its predecessors, will inspire and improve MADI networks over many years.

The compact MADI Router combines MADI devices from different manufacturers with unprecedented flexibility. This is achieved by various technical features: it can convert equally between optical and electrical MADI formats, refresh or amplify signals, and above all distribute or merge them on different connectors - all at the same time. The MADI Router combines the advantages of point-to-point connections, such as low latency and fast connectivity, with the flexibility of audio networks where each device has access to each audio channel of all connected devices.

In the simplest type of connection, MADI input signals are routed without modification to one or more MADI outputs without modifying the data they contain. This type of connection is useful, for example, if manufacturers have changed the MADI signal to embed protected control data, or if large components of a MADI system are to be connected differently at the touch of a button, for example if a stage box fails.

It is also possible to merge the audio channels contained in the connected MADI signals into new MADI data streams. For this purpose, the MADI Router has four matrices that independently access the up to 768 audio channels of the twelve MADI inputs and combine up to 64 of these into a new MADI data stream, provided that the source signals have identical sampling rates and are synchronous to each other.

During the development of the MADI router clarity and simple operation were in the foreground. It is the only audio router of its kind that can be operated completely and without external aids directly on the device. It is equipped with a TFT display which shows the current status of the device and guides the user through the setting options. Operation is via four keys and two rotary encoders.

The state of the device, including its complete audio routing, is saved with each change (AutoSave) and restored within 10 seconds after a restart of the device. In addition, 15 presets are available, which can be saved and loaded by the user as well as previewed before loading.

The rear of the unit offers a variety of connection options for maximum compatibility in a wide range of applications. Four optical and four coaxial MADI inputs detect signals of various formats and sampling rates. An equal number of outputs are available for either the electrically regenerated signal of any input, or a signal composed of the audio channels of different inputs. A newly developed output circuit increases the reliability of coaxial data transmission with long cables; optical cables support up to two kilometers.

A novelty at RME are the four MADI TP (Twisted Pair) connectors. These four combined inputs and outputs provide MADI at a conventional network jack, enabling the use of standard network cables over distances of up to 150 m. In addition, the MADI Router provides DC voltage at the MADI TP connectors to supply the ADAT converter and the AES3 converter.

All 12 MADI connectors are completely independent from each other. They were divided into four groups "A", "B", "C" and "D". The word clock input can be used as a basis for each of the four signals newly compiled with the help of the matrix, or it can be passed on to the word clock output jitter-cleaned. It can also be used to provide an internal sampling rate for other devices (master), or to pass on a word clock from one of the twelve connected MADI signals.

Two 100 Watt power supplies redundant to each other provide enough power for the device itself as well as for up to eight passive devices connected to the MADI TP sockets. The power supply can be locked with the optionally available power cables at the sockets.