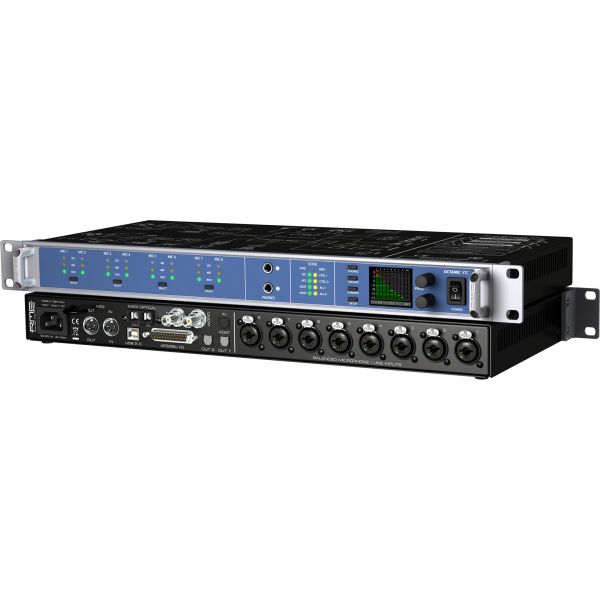 The OctaMic XTC combines eight microphone inputs, four of them switchable to Hi-Z mode, with an unrivalled variety of digital networking options - from the popular ADAT and AES/EBU to the sophisticated optical MADI protocol.

The analog signals are digitized using RME's latest converter technology. In the tradition of outstanding sound quality and frequency response that RME converters are known for, this preamplifier shines with an exceptionally wide gain range, extremely low latency, amazingly low ON, and the best signal-to-noise ratio.

The setting options, which are quickly and easily accessible via the color display, reveal further unique functions: all analog and digital inputs, including up to 64 MADI channels and 8 AES/EBU channels, can be freely assigned to any output! Of course, this also applies to the 24 channels with which the OctaMic XTC can be used as an audio interface in Class Compliant mode via USB 2.0.

The remote control directly from the TotalMix FX of a connected RME audio interface is also very practical: It only takes a MIDI connection (via DIN cable, MIDI over MADI or via USB) to integrate the OctaMic XTC into TotalMix FX like a channel strip. A perfect example is the combination of a Fireface UFX with the OctaMic XTC, both connected via ADAT, so that RME's flagship interface easily gets 8 analog inputs and 4 analog outputs in addition.

The comprehensive remote controllability allows the user to place the OctaMic XTC optimally close to the (analog) signal sources, while at the same time the settings can be adjusted remotely during operation, and even configurations can be saved or called up.

With a total of 24 available input and output channels in Class Compliant mode, the OctaMic XTC is also the most flexible and advanced interface that can be connected to the iPad (requires Apple's Camera Connection Kit).

The OctaMic XTC is a remote-controlled high-end microphone preamplifier and AD/DA converter in reference quality. In a compact 19" housing of only one height unit, it offers numerous unique functions such as Intelligent Clock Control (ICC), SyncCheck, QuickGain, AutoSet, MIDI over MADI, and remote control via USB, MADI and MIDI. It contains an 8-channel A/D conversion with up to 192 kHz/24 bit, with 8 high-class microphone or line/instrument preamplifier inputs in best RME quality. Lowest distortion, outstanding signal-to-noise ratio, and perfect linear frequency response guarantee unadulterated transmission and amplification of all input signals.

The XTC offers 8 balanced mic/line inputs via XLR. 4 balanced line inputs via stereo jack and 4 unbalanced line/instrument inputs via mono jack were realized via Neutrik combination sockets with XLR and TRS sockets. Operating elements on the front panel allow quick access to the most frequently used functions, while a high-resolution TFT colour display ensures optimum visualisation of the settings and signal conditions in the device.

The OctaMic XTC's 8-channel AD and 4-channel DA conversion supports up to 192 kHz sampling rate. The digitized input signal is simultaneously available at both ADAT outputs (S/MUX), a 25-pin D-Sub connector (4 AES/EBU outputs) and the optical MADI interface. Under Mac OS X also connected to an iPad up to 24 channels can be used via USB.

RME's unique SteadyClock technology ensures perfect AD/DA conversion because any jitter from connected devices is almost completely suppressed. All digital inputs and outputs can be used simultaneously with all AD/DA paths. Powerful routing capabilities allow the OctaMic XTC to work as an AD/DA converter with various digital outputs in different formats - thus also as a format converter between ADAT, AES/EBU and MADI. Signals can also be easily fed into or removed from an existing MADI signal stream.