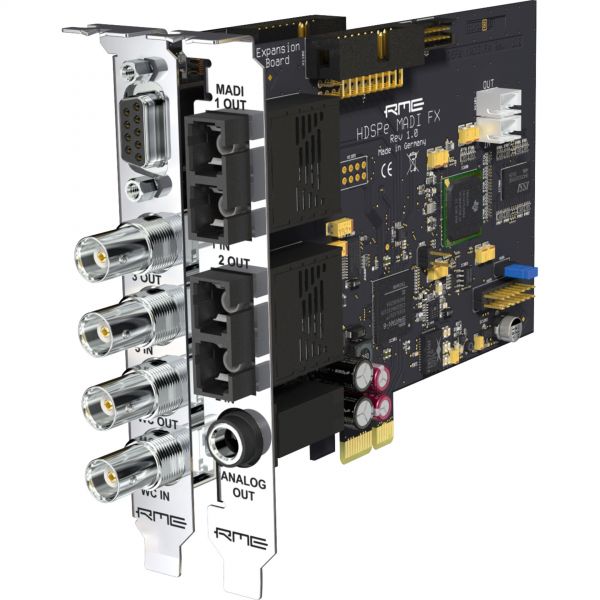 
* incl. 19% VAT for Germany.
VAT rate may vary depending on delivery country at checkout.
To compensate, use our discount on payment methods!

The HDSPe MADI FX sets a new milestone among RME audio interfaces. Never before has there been such a high-performance and at the same time powerful multi-channel computer interface.

390 channels! Three MADI I/Os twice optical and once coaxial are accompanied by an AES/EBU I/O and an analog monitor output. In addition, there is a word clock I/O and a total of four MIDI I/Os. The complete technology as well as all connections can be found RME-typically highly concentrated in the smallest space. All you need is a PCIe slot on the motherboard and a second free slot opening on the computer.

To guarantee RME's worldwide unique low-latency performance even with so many channels, a new, modular high-tech audio core was developed that processes more than three times the number of channels of the previous RME-MADI flagship and requires even less system load. Even if all 390 channels are used, a powerful computer can still deliver record-breaking latencies of up to 32 samples. Sophisticated efficiency technology automatically shuts off channels in the hardware that are not currently in use, so they do not require any computing power. With a simple stereo signal, the computer is not stressed more than with a simple stereo card, despite a professional multi-channel system with almost 400 channels!

The new core technology goes hand in hand with a special TotalMix FX version to use the enormous number of channels efficiently and practically. In addition to numerous performance optimizations that make the 4096-channel mixer of the MADI FX just as fluid as its Fireface UFX counterpart (1800 channels), and a faster DSP for a higher number of EQs and compressors, this applies above all to the manageability of the sheer mass of channels. A new hide technology makes it possible to optically blank out unused channels. Hide setups can be saved and loaded at any time, for example to switch between the display of the drum mix and the complete band mix with a mouse click.

Equipped with the 192 kHz Fireface UFX effects engine and an even faster DSP, latency-free monitoring with numerous EQs, dynamic compressors, as well as reverb and echo can be created directly on the card, completely independent of the running DAW software.

The integrated TotalMix matrix also allows the use of the MADI FX as a MADI router. In contrast to most router solutions, each channel can be routed individually at will - even with any gain that differs for each routing. Of course, the additional MADI ports can also be used via TotalMix to forward or recombine the signals arriving at the inputs. TotalMix unmatched flexibility transforms every conceivable application into practical reality.

RME's unique seamless redundancy operation uses the 3 MADI I/Os to provide professional users with a fail-safe redundancy mode. In SRO mode, the card operates as a single MADI input device for recording up to 64 channels; the other two I/Os are available for redundant data transmission. If the MADI input fails, the system automatically switches to one of the other two inputs. The audio stream is not interrupted. A change or synchronization to another clock source is not necessary. The interruption caused by an external error is reduced to a few samples.

The core of the new PCI Express MADI platform is TotalMix FX, a DSP-supported hardware mixer with internal 64-bit resolution that does not have to hide its functional diversity behind high-end digital consoles.

With the Fireface UFX counterpart, complete live setups have been mixed directly in the interface for some time now. TotalMix easily replaces the usual digital FOH digital consoles. The version of the HDSPe MADI FX goes one step further thanks to its number of channels and additional routing options.

The MADI FX uses the 192 kHz effect engine known from Fireface UFX and UCX. In order to provide as many channels as possible with high-quality effects in the sheer volume of almost 400 channels, the effect efficiency has been further improved and an even more powerful DSP of the latest generation has been used. The performance enhancements allow the 4096-channel mixer to react just as smoothly as RME interfaces with significantly fewer channels.

Each input and output channel is luxuriously equipped, comparable to that of a high-quality digital mixing console. Per channel 3-band parametric equalizer, adjustable low cut, auto level, compressor, expander, MS processing and phase are available. The reverb and echo effects are available to all channels via a stereo send and return bus. Each output channel - analog as well as digital - has its own effect return, which is used to set an individual mixing ratio with the reverb/echo signal.

All effects - especially the reverb - are even available at 192 kHz.

The complete effects section not only adds flexibility to the recording chain, but also eliminates the latency problems of common software. TotalMix easily replaces external mixing consoles, for example, to create different, latency-free monitor mixes, including EQ and reverb, for the studio monitors and headphones of the musicians in the recording room.

The FX-DSP has automatic overload monitoring. As soon as no more effect can be switched on, this is clearly signaled in the TotalMix surface. When switching to higher sample rates, effects exceeding the maximum power are automatically deactivated so that the DSP is not overloaded under any circumstances and the user is spared from damaged loudspeakers. In addition, the DSP hardware calculates the RMS and peak level values of all 390 audio channels without causing CPU load in the computer.

The development of a new channel management system was necessary in order to be able to process the unbelievable number of 390 channels in live and studio setups, which often only require a part of them.

Although TotalMix FX features a sophisticated multi-window technology right from the start that displays and controls different views of the mixer at the same time, the practical overview is still missing with up to 196 channels. For example, a mixdown of channels 1, 2, and 191/192 would mean a constant scrolling back and forth in the window. In addition, these channels would never be directly visible in a single view.

All these and other limitations are eliminated by the new Hide technology in TotalMix FX. Any channels can be hidden optically on request. Hide setups can be saved and loaded at any time.

An example: on channels 73 to 85 all signals of a drum set are present, over 110 to 114 electronically generated drum sounds are added. Hide now removes all other channels from the TotalMix view, and at the push of a button you only have the complete drum mix in front of you, with channels 110 to 114 seamlessly connected to channel 85 all in one window, perfect overview, optimum operation.

Hide also allows you to hide channels for connected MIDI remote devices. This allows remotes to control any selection of up to 196 channels with just a few faders - without any further switching.