Dear customers, dear visitors, we are here for you again within the business hours and look forward to the contact with you. We wish you a great week. 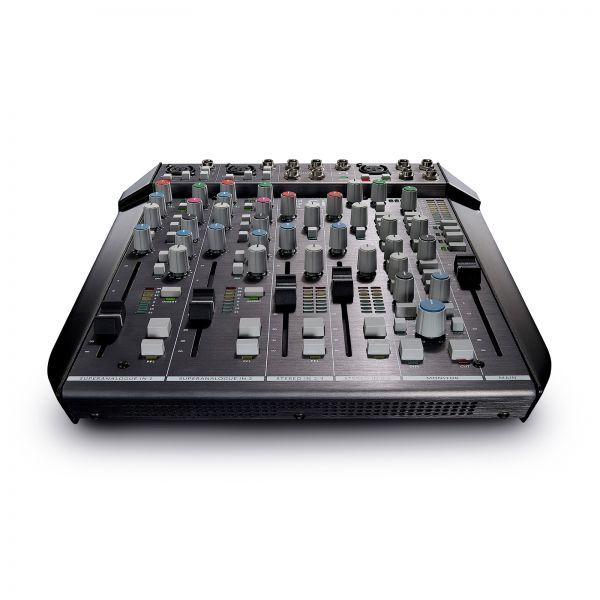 With SiX, Solid State Logic presents a small, exceptional mixer for studio and live applications that delivers the same popular quality of larger and well-known SSL consoles. On the one hand, the mixer provides a lot of connection possibilities like XLR-, jack-, D25-inputs, as well as mix bus-, main-, DB25- and foldback outputs - thus many application areas are covered, no matter if recording or gig. On the other hand it convinces with high-quality compressors - among others the G-Series Bus Comp, inspired by the SL4000G console - and the two Band Channel EQ with HF and LF bands. Phantom power, Hi-Z switch, trim, pan and insert points for external processing are also included. Two stereo channels, which can also be operated with 100mm faders, as well as a monitor and foldback master section are also included. The practical device is rounded off by a talkback input and built-in LEDs for both the compressors and the monitor sources.

Connectors for live and studio applications

Starting with the connectors, SiX offers two analog mono channels with XLR and jack sockets, two stereo ins via jack, external inputs, a talkback input and a headphone out, while the rear provides two D-Sub 25 connectors for send and return or I/O in addition to monitor outputs and main out - enough to quickly and easily realize various setups in live or studio use.

Anyone who deals with professional studio equipment will quickly notice that SSL is one of the top brands in the audio industry and that the many years of experience in all devices comes to the fore, of course, with the compact SiX: The SuperAnalogue pre-amps amplify incoming signals just as reliably and clearly as those of the large consoles, while the built-in compressors and equalizers always sound outstanding and deliver optimum results at all times. And of course, if you want to loop in additional external effects, you can do the same!