we are here for you during business hours and would be happy to talk to you. Thank you very much. 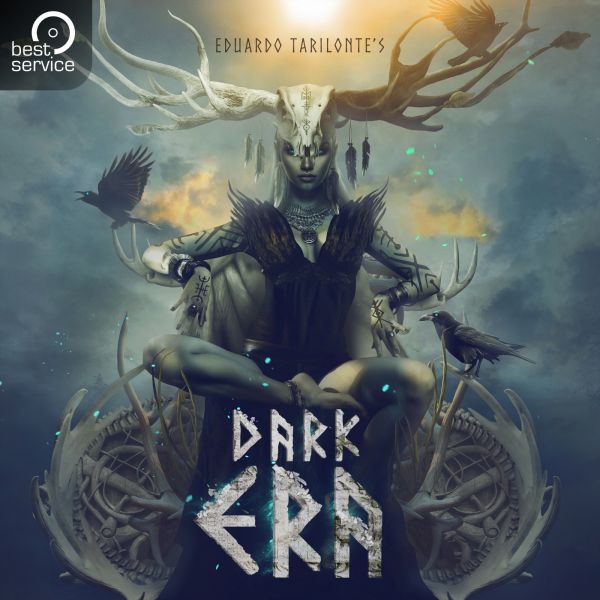 With Dark ERA, Eduardo Tarilonte, the master of mystical sounds, takes us back to a dark time in which the earliest legends came into being and the ancient gods of the north still determined the fate of mankind. With this library you can experience the sounds to which the Vikings and other long forgotten peoples and cultures sang their myths.

The fascinating sounds of Dark ERA range from the transcendental drone of the ancient Tagelharpa string harp to the unmatched beauty of the lyre strung with gut strings to the unmistakable, distinctive sound of Nordic bone flutes and the Fujara overtone flute.

The sound of war horns like the wooden Lur, the thunder of mighty percussion instruments and a whole ensemble of frame drums as well as mystical throat singing guarantees goose bumps. These instruments are complemented by an impressive collection of atmospheric soundscapes that develop over long periods of time and rhythmically pulsating surfaces. These unique sounds make Dark ERA another masterpiece by Eduardo Tarilonte.

Dark ERA offers over 50 instruments consisting of more than 20,000 samples. These include seven string instruments, 17 wind instruments and 33 drums and percussion. In order to achieve the most authentic and diverse playing style possible, several playing techniques were recorded and implemented in the library or the powerful cross-platform sample player engine. The wind instruments have True Legato and various articulations. In addition, the flutes deliver some very unusual, penetrating effect sounds.

The string instruments also have round robin samples for up and down notes. The plucked instruments were recorded using various playing techniques such as plectrum, finger and strumming.

The collection of instruments is complemented by more than one hundred elaborately programmed soundscapes, some of which are rhythmically animated and pulsate at the same tempo or create an unreal atmosphere with multi-layered sound textures. They consist of several elements, which the user can adjust separately in the mixer of the engine in volume and panorama according to his own wishes.

The Epic Loops, consisting of up to 16 instruments and up to 20 separately controllable elements, have been programmed for the rhythmic background music, with which the beats can be arranged flexibly. There are four variations of the main loop, different fills and endings (ensemble and single hits) and a pulsating sound to match the rhythm. The loops intelligently adapt to the tempo of the DAW.

The Rhythmic Pads, which contain both melodic and rhythmic elements, create a connection between drums and solo instruments. As with the soundscapes, the individual elements of the pads can be individually mixed and distributed in the panorama.

Another special feature of Dark ERA is the vocal section. Vocal rhythms inspired by the Inuit can be composed from single tones. 24 MIDI files, which play the individual shouts, serve as templates. Of course, the rhythms can be changed or completely recreated.

The recordings of laryngeal chants are divided into four different styles. Even C3 harmonics can be faded in via the slider. Shamanic ritual songs and single vocals bring lively and authentic elements into the music.

The fields of application

This library is the optimal instrument for film soundtracks and TV documentaries with the corresponding thematic orientation. The library is also suitable for historical music productions or ambient music. In addition, it also provides the appropriate stylish background for games with this background.