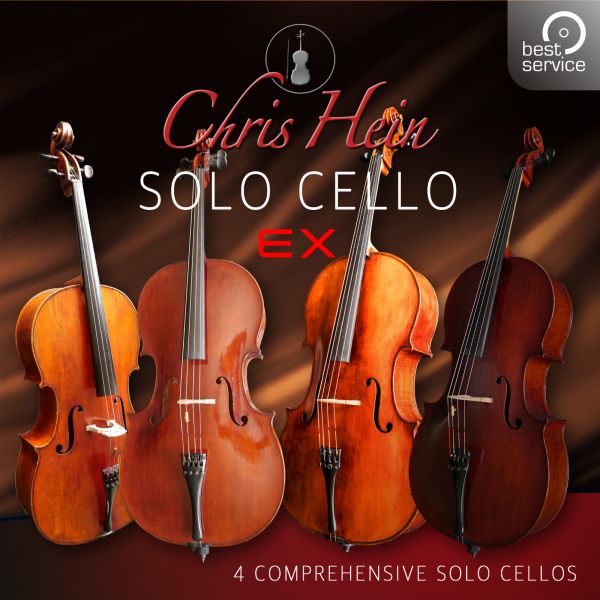 Chris Hein - Solo Cello EXtended is a bundle of four fantastic sounding solo cello instruments.
The recordings were made by experienced studio musicians on selected instruments with special timbres. The virtual implementation was optimized for even better playability and performance (EX Instruments). This saves your computer resources and you still have all the basic articulations for nuanced play at your disposal.

The following instruments are available:

The four instruments sound absolutely authentic in every way, whether as ensemble or solo. Chris Hein - Solo Cello EXtended delivers outstanding, detailed and above all expressive results in all genres relevant to this instrument: classical music, film music, gypsy jazz, folklore, pop ballads.

Chris Hein - Solo Cello EXtended will satisfy the discerning lover of stringed instruments as well as composers who need more than just outstanding samples and who explicitly value comprehensive details, a complete range of playing styles and a flexible adaptation to the preferred working method.

On the one hand, the instrument offers an elaborate full sample set in which all of the numerous articulations are ready to play on the keyboard. Thanks to the modular approach of the library, it is also possible to call significantly reduced variants in which the loading times are kept short and the memory requirement is low.

As with all Chris Hein productions, a conscious decision was made to use a recording microphone in a dry recording room. The dry sound of the library, in combination with the double reverb section on a convolution basis of the sample engine, allows the instrument to be optimally adapted to a wide variety of contexts. Separate folding units for the body sound (body) and the spatial impression (room) allow the creation of almost any spatial impression, ranging from intimate proximity to the large orchestra hall. In contrast to the fixed spatiality of several competing products, Chris Hein - Solo Cello EXtended is therefore extremely variable in terms of sound and can also be combined with almost any other library.

The combination of long played and short notes in Sample Libaries always raises problems regarding the authenticity of the sound image. When playing real instruments, the length of the tone influences both its attack and the end of the tone. The solution for this aspect is the "Note Head Designer". This function, known from other Chris Hein libraries, has been extended considerably for Chris Hein - Solo Cello EXtended. Up to 102 Attack Shapes are available. From this, up to twelve adapted short sample variants (shorts) can now be called up for each sustain style, which not only have the corresponding attack behavior, but are also perfectly bound according to the tone length.

Chris Hein - Solo Cello EXtended offers True Legato in up to four dynamic levels as well as separated for short and long. The result of the corresponding elaborate recordings and editing leads to unimaginably realistic sound results at the tone transitions. At the same time, there are possible realistic-sounding combinations with artificially inserted legato variants.

The performance data reflects the effort put into recording and configuring this library. The instrument consists of over 30,000 individual samples, up to 38 articulations and up to eight velocity layers. So Chris Hein - Solo Cello EXtended is probably the most detailed sampled cello collection on the market.