We wish you a great weekend and would like to say a big "Thank You" for so many orders. We are back for you on Monday. 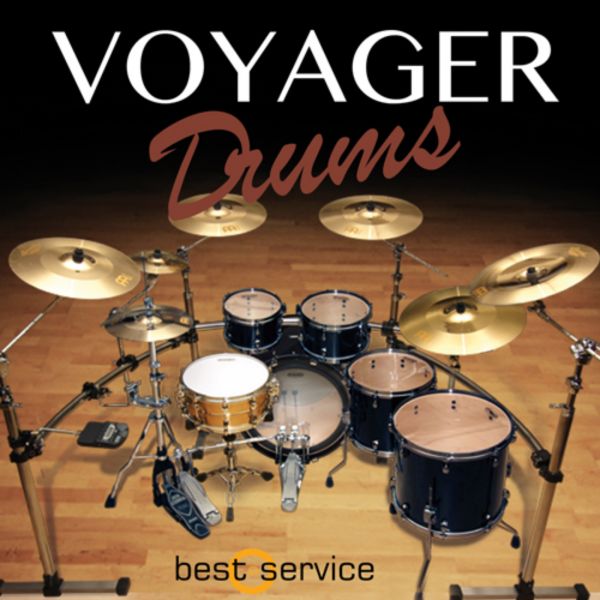 With Voyager Drums from Best Service you get two Power Drum Kits, recorded and edited by the creator of the legendary "Artist-Drums" and "Artist Grooves".

The powerful and powerful sound is particularly suitable for use in pop, rock, jazz and funk productions. 360 live MIDI grooves for immediate playing are also included.

Three different layers are available for each kit:

The Voyager drums were recorded from three different microphone positions. The recordings took place in the Principal Studios near Münster. It was recorded with 24 Bit and 96 KHz, 5 Round Robins and 16 Velocity Layers. The finest equipment from SPL, API and Apogee was used, including microphones from Neumann, Sennheiser, AKG, Rhode and Shure.

You can set the attack and decay time separately for all signal sources. Since the direct signal was recorded as mono, panorama control is possible here.

In combination with the additionally included "Trigger Samples" (electronic drum sounds) for bass drum, snare drum and toms an enormous variety of sounds can be realized, so that nothing more stands in the way of your own, unmistakable drum kit.
The trigger sounds have their own pitch and delay controls.

The effects section is designed for easy operation. The compressor offers a selection of common presets. The limiter limits the output signal. With the equalizer and distortion, you can shape the sound according to your taste.

With the integrated arranger you have the possibility to play MIDI grooves live. You have 48 Straight Grooves, 12 Triplet Grooves and 12 Fills at your disposal per bank. The speed of the grooves automatically adapts to the speed of your sequencer.
The different benches contain grooves that were played at the specified speed. This gives you a total of 360 midi grooves at your disposal.