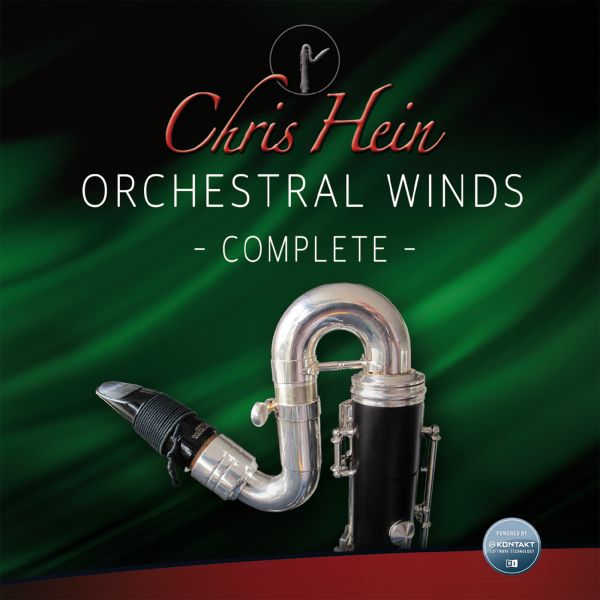 Play woodwinds at the computer in never heard perfection!

Chris Hein - Winds is an extremely elaborate woodwind library that meets the highest demands in terms of sound, expressiveness and usability. The instruments of the library are based on carefully created, elaborate and detailed multisamples and offer numerous articulations with up to eight dynamic levels. Producer Chris Hein has brought more than 30 years of experience in sampling to this library, giving the user maximum flexibility, configurability and practical benefits.

Now new: Version 2 with these improvements

Chris Hein - Winds consists of four parts, which are available as single volumes or as a complete version. The library contains a total of 13 instruments: four transverse flutes, three clarinets, three oboes and three bassoons.

At Chris Hein - Winds, the main focus is on orchestral woodwind sounds with the greatest possible flexibility. The library can be configured almost at will and thus meets the individual requirements and working methods of all producers. The library offers options and solutions for every practical application - simply everything has been taken into account! This of course also includes the powerful sample engine, which was adapted to the specific requirements of the instruments at hand on the basis of Native Instruments' Kontakt Player with its elaborate, tailor-made user interface and comprehensive scripting.

Chris Hein - Winds is therefore equally suited to discerning lovers of woodwind instruments, but also to specialists who demand more than just outstanding samples, but who explicitly value comprehensive details, a complete range of playing styles and flexible adaptation to the desired working method.

On the one hand, the instruments offer an elaborate full sample set in which all of the numerous articulations are ready to play on the keyboard. Thanks to the modular approach of the library, it is also possible to call significantly reduced variants in which the loading times are kept short and the memory requirement is low. In the clean-start configuration, the instruments are first loaded into memory in a sustain variant, while all other articulations and functions that consume resources can simply be reloaded at the touch of a button, and only when they are needed. This allows you to work smoothly and efficiently even on compact and mobile production systems with lean memory requirements.

Chris Hein - Winds offers you orchestral woodwind sound in perfection. In addition to careful recording with high-quality technology, such as high-quality Neumann microphones, the musician himself also has a significant influence on sound aesthetics. In contrast to the award-winning Chris Hein - Horns, the orchestra musicians of the WDR Symphony Orchestra, among others, were deliberately used here.

For this production, a conscious decision was made to use a dry pickup microphone, whereby the instruments were recorded individually without any crosstalk. Nevertheless, Chris Hein - Winds takes into account the necessary interaction in the formation of sound between the orchestral musicians. During the recordings, the musicians were able to orient themselves acoustically to their fellow players via headphones. Time-dependent articulations such as Dynamic Expression thus receive a particularly harmonious sound image that enables you to combine the individual instruments into perfectly coordinated ensembles.

The dry sound of the Chris Hein Winds in combination with the double convolution reverb section of the sample engine allows you to optimally adapt the instruments to different contexts. In the contact player, the individual instruments can be placed freely in the panorama. Separate folding units for the body sound (body) and the spatial impression (room) allow the creation of almost any spatial impression, ranging from intimate proximity to the large orchestra hall. In contrast to the fixed spatiality of several competing products, Chris Hein - Winds is therefore extremely variable in terms of sound and can also be combined with almost any other library.

In six months of research work, all samples were adapted to each other in their phase position. Accordingly, the sound image of the instruments convinces with absolutely seamless transitions between the dynamic levels without sound impairments.

The combination of long played and short notes in sample libarys always raises problems regarding the authenticity of the sound. When playing real instruments, the length of the tone influences both its attack and the end of the tone. Chris Hein - Winds dedicates himself to this aspect with the "Note Head Designer". Here you can call up six adapted short sample variants (shorts) for each sustain type via controller/knob, which not only have the corresponding attack behaviour, but are also perfectly bound according to the tone length. The user-defined selection of the desired short variants, each available in eight dynamic levels and combined with the corresponding sustain phases, enables an absolutely realistic sound result that cannot be achieved with conventional random selection methods according to the round robin principle. Of course the shorts are also available as single articulations.

The instruments in Chris Hein - Winds offer true legato in up to four dynamic levels. When playing the French Horn, for example, the sample engine ultimately selects over 2,200 samples for the note transition. The result of the corresponding elaborate recordings and editing leads to unimaginably realistic sound results at the tone transitions. At the same time, there are possible realistic-sounding combinations with artificially inserted legato variants.
Scope of the Library

The performance data reflects the effort that has been put into both recording and configuring this library. Each instrument consists of nearly 10,000 individual samples, 14 articulations and up to eight velocity layers. Thus the instruments of Chris Hein - Winds are probably the most detailed sampled orchestral woodwinds available on the market. The user interface of the Kontakt Player not only contains numerous functions for sound design and the adjustment of playing styles, but also gives the user a lot of freedom in the configuration. But also for the fast application without own editing is provided. 26 pre-programmed key switch presets at the lower end of the keyboard (A-1 to A#1) allow quick testing of all variants.

With four Dynamic Modes, Note-Head Designer, Key-Vibrato and Hot-Keys, and a revolutionary concept of articulation presets, the user interface gives the musician the feeling of playing these instruments live.