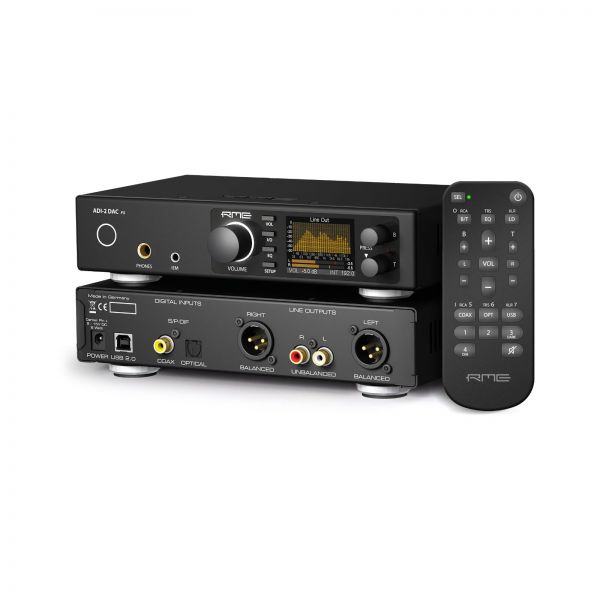 * Price incl. VAT
Use our payment method discounts to compensate
the differences between countries' VAT rates !

The ADI-2 DAC offers an improved SteadyClock, a perfectly tuned analog circuit, a remote control, an Extreme Power headphone output, and additionally a special IEM output. It has all the features that have made the ADI-2 Pro famous, first of all its completely transparent sound and the elaborate DSP processing with bass, treble, loudness, parametric 5-band EQ, crossfeed and much more. With its simplified operation and breathtaking design, it is the ideal heart for the listener at home to reference playback in the studio.

In 2016 RME published the ADI-2 Pro. With many fresh ideas, innovative features and numerous useful functions, it has since rolled up the AD/DA converter scene and quickly became the reference for AD and DA conversion. Thanks to its two Extreme Power headphone outputs, it has also been well received in home and hi-fi applications, and has received countless enthusiastic reviews for its sound, flexibility, and technical capabilities.

To better appeal to home and hi-fi users, RME replaced some of the studio features with typical hi-fi features. RME now presents the ADI-2 DAC, equipped with an adapted as well as an extended range of functions and a simplified operation. This is based on the technology, concept and features of the ADI-2 Pro, but focuses on high-end DA conversion combined with two exceptional headphone and IEM outputs, and a remote control.

Packed in a compact 9.5 inch format, this little gem is equipped with the finest high-end electronics, and offers a reference conversion from SPDIF coaxial, SPDIF optical (ADAT compatible) and USB to Cinch, XLR, TRS and mini jack.

With the DAC, RME's engineers took the opportunity to further perfect the DAC's analog output stage. With more relays, an improved double-balanced attenuation circuit and an additional buffer operational amplifier, even less noise and distortion is achieved. Since the DAC chip is the limiting factor here, this is difficult to measure, but still an important improvement, especially at the lower output levels typical for cinch applications. The new hardware reference levels of +13 dBu, +7 dBu, +1 dBu and -5 dBu also play their part.

The continuing trend towards headphones has not only attracted the attention of conventional headphones, but also of IEMs (in-ear monitors) among audiophiles and music lovers. Modern IEMs feature reference-quality sound that can easily compete with bulky over-ear headphones, making them not only a mobile alternative, but also an interesting solution for the home.

Modern IEMs are extremely empﬁndlich and work with very low voltages. As a side effect, however, they often make the background noise of the player, DAC or headphone amplifier audible. During the development of the Extreme Power headphone circuit, care was taken to keep the background noise as low as possible. This has been confirmed in many tests (deep black background...). Even when using IEMs.

However, RME wanted to make sure that even the empﬁndlichste IEM would deliver the full dynamic range to the ears of the empﬁndlichsten music listener. High-quality outputs such as Extreme Power are not immune to operating errors and could overtax ears such as IEMs.

RME's solution: To add the most advanced IEM output imaginable as a second headphone output on the front of the ADI-2 DAC. Its background noise is astonishing 10 dB lower than that of the Extreme Power output (black hole...), the output impedance is almost zero ohms and the THD value reaches new record depths. Click-free power on/off is just as natural as volume ramp-up, and the sound quality with every IEM is simply incredible. We are sure you will be thrilled!

A studio converter without lighting? Broken. But for a DAC this was one of the wishes expressed by HiFi customers at häuﬁgsten for the ADI-2 Pro. Now it's coming true: display, function keys, volume control, even the standby button - they all go off after 10 seconds without user input when AutoDark is enabled in the device's menu. By touching any button or rotary knob, the lighting switches on again for 10 seconds. AutoDark can also be switched on and off using the remote control. Press any button on the remote control to turn on the backlight for 3 seconds. You will surely love this too!

The ADI-2 DAC comes with a remote control that is more than the usual cheap accessory. This elaborately designed remote control has clearly labelled buttons that can be read without reading glasses even in poor lighting conditions, an easy-to-remember logical button arrangement and perfect button ergonomics. And: It does not interfere with ATV or other devices.

The DAC remote offers buttons for standby on/off, volume, input selection (optical, coaxial, USB) and mute. In addition, there are four programmable keys that provide access to 22 different functions and commands for maximum flexibility. There is no other converter or comparable device with such a sophisticated, easy to use and at the same time versatile remote control!

The ADI-2 DAC is the first device in the RME portfolio with SteadyClock FS. There is not much to improve on SteadyClock, the circuit has in years of flawless operation in numerous RME devices much praise and awards earned. It ensures that when using the internal clock, exactly the same sound quality is achieved as with any external source. SteadyClock effectively suppresses jitter and processes all digital interface formats in an exemplary manner. Therefore the design and behaviour of SteadyClock in the ADI-2 DAC have not changed.

With SteadyClock FS the focus was on reducing the jitter to the lowest values. This was achieved by improving the second analog PLL circuit, and referencing the Direct Digital Synthesis as well as the PLL to a quartz with lower phase noise. The jitter that can be measured via a DA conversion now reaches values that are normally only available in master quartz mode, while SteadyClock continues to run in PLL mode - no matter if internal or external clock, the sound is (again) exactly identical. The low phase noise quartz used for the updated circuit has a jitterSpeziﬁkation below one picosecond (ps), a range called FemtoSecond. Hence SteadyClock FS.

Session:
The session cookie stores your shopping data across multiple page views and is therefore essential for your personal shopping experience.
Wish List:
This cookie allows the wishlist to be saved in the customer account.
Device assignment:
This cookie identifies the device with which the store is accessed, as well as its screen resolution. This allows the store to be displayed graphically correct.
CSRF-Token 2:
This CSRF token 2 cookie enhances your security. It strengthens the protection of forms against unwanted hacking attacks.
Login Token:
The login token is used to recognize registered users.
Cache exception:
The cache exception cookie allows users to read individual content independent of the cache memory.
Cookies Active Check:
This cookie is used by the website to find out whether cookies are allowed by the site user's browser.
Cookie Settings:
This cookie is used to store the site user's cookie settings over multiple browsing sessions.
Origin information:
Dieses Cookie speichert Cookie-Einstellungen des Benutzers bezogen auf seine Landesherkunft.
SmartsUpp Chat:
This cookie ensures the functioning of our customer chat.
Google Conversion Tracking:
The Google Conversion Tracking Cookie is used to effectively record and evaluate purchases on the webshop. This information is used by us for online advertising over Google Ads.
Stripe Payments:
This cookie is used by the payment provider Stripe to ensure security when processing payments on the website.
SmartsUpp Chat:
This cookie provides the chat function for the user on our website. This ensures the function of the application when switching pages within the store.
Cookie Banner 2:
This cookie saves your cookie banner settings even if the switch to another website is executed.
Cookie Banner:
This cookie stores your cookie banner settings.
Listing View Switcher:
This cookie stores the settings for the display of the results list of a search query on our website.
SmartsUpp Chat:
This cookie ensures the functioning of our customer chat.
Payment Security:
This cookie provides additional security for payment processing.
Coockie Consent:
This cookie stores the user's cookie consent status for the current web store language.
Scroll Position:
This cookie stores the position of the scrolled website when switching to other website.
Error analysis:
This cookie helps us to find functional errors of the webshop.
Anonymized statistics:
This cookie allows us to collect anonymized data about product demand. This allows us, for example, to identify the demand for certain products and to ensure a larger stock.
User Session ID:
This cookie sets a user ID so that user settings can be recalled when you visit our store again.
Activated Cookies:
This cookie stores which cookies have been accepted by the user.
Session:
This cookie stores the user settings that are and were made on the website.
CSRF-Token:
This cookie is responsible for the security of data entry and transmission and significantly protects the shop against hacker attacks.
Partnerprogramm:
This cookie ensures the functioning of various auxiliary systems of the web store.
dmCountryChanged:
This cookie supports VAT calculation for a selected country. This cookie remembers the selected country even if you should leave our webshop in the meantime.
MwSt. nach Lieferland:
This cookie supports VAT calculation for a selected country. The selected country is stored in this cookie for the current session.
Google Analytics:
Google Analytics allows us to continuously analyse and statistically evaluate our website by integrating a tracking code into the code of our site.
Google Tag Manager:
The Google Tag Manager makes it easier to implement web analytics tools such as Google Analytics on our website.
Marketing