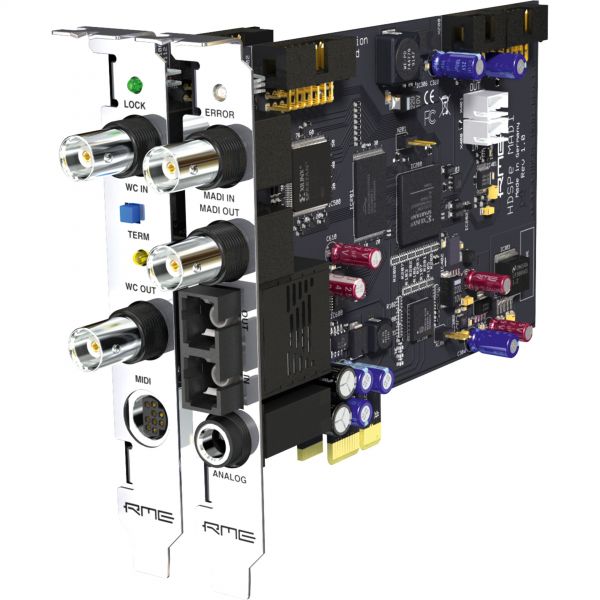 
* incl. 19% VAT for Germany.
VAT rate may vary depending on delivery country at checkout.
To compensate, use our discount on payment methods!

With the HDSPe MADI, RME presents a PCI Express card with MADI interface that is as inexpensive as it is outstanding. HDSPe MADI is based on the HDSP MADI, and represents the new top model of the worldwide successful card series.

The PCI Express card consistently uses all the advantages of the MADI format: The professionals' multichannel audio digital interface offers 64 channels of 24-bit audio at up to 48 kHz sample rate, 32 channels at up to 96 kHz, and 16 channels at up to 192 kHz. Transmission is via a single cable, either coaxial with BNC connectors or fiber optic cable. In both cases, far more than 100 meters of cable can be achieved.

Compared to the HDSP MADI (standard PCI) variant, the PCI Express version offers several advantages: Support for higher sample rates (previously 96 kHz), more options in TotalMix (phase and internal loopback per channel, +6 dB gain for outputs), as well as the ability to directly connect the Time Code option. These advantages are combined with further improved latencies, which make the card interesting not only for live recording applications, but even for live mixing applications. The analog monitor output uses the low-latency converter technology of the ADI-8 QS, which also guarantees excellent technical data (SNR/THD).

The HDSPe MADI is fully compatible to all devices with MADI interface. Of course, it can be ideally combined with the products of the RME MADI series. The ADI-648, for example, is an unbeatable 8-way ADAT optical interface in price and performance. The ADI-6432 provides the HDSP MADI with a bidirectional AES/EBU frontend with 64 channels.

Three HDSPe MADI can be used at the same time with the appropriate hardware of the computer (PC/Mac). This means that 196 inputs and 192 outputs are available simultaneously on a single workstation!

While most MADI devices require an additional word clock or AES line, HDSP MADI (as well as the ADI-648) can extract the reference clock directly from the MADI signal with low jitter thanks to SteadyClock(TM), making connections over long distances even easier. As usual with RME, the Hammerfall DSP MADI offers further useful features. This includes an analog, 24-bit/192 kHz capable line/headphone output with 116 dB dynamic range, so that all input and output signals can be controlled directly.

The expansion board included in the scope of delivery contains the word clock I/O (BNC) and the MIDI I/O. The word clock input is galvanically isolated with a transformer and processes single, double or quad-speed signals fully automatically. MIDI I/O offers 2 complete MIDI inputs and outputs via breakout cable (4 DIN sockets). Via a virtual MIDI port, MIDI signals of RME can also be transmitted directly via MADI.

RME uses a configuration memory for the most important settings of the card. Instead of operating in a default mode from powering on the computer to loading the driver, HDSPe MADI immediately activates the last used sample rate, master/slave configuration and MADI format on power-up. This eliminates interference noise and problems in the clock network, even when the computer is switched on or rebooted.

After a click on the symbol in the systray of the task bar (hammer) the configuration dialog of the HDSP MADI appears. The clearly arranged and structured structure and the unique informative status windows for input signal, clock modes and sample rate make working with the Hammerfall DSP a pleasure.

With several digital inputs, it is particularly important to be informed not only about the lock states, but also about the synchronicity of the signals. RME's exclusive SyncCheck ® checks all inputs and outputs the result in plain text, and thanks to Intelligent Clock Control (ICC) you always have clock settings and synchronization under control.

Thanks to SteadyClock, the HDSPe MADI can freely determine its own sample rate. The DDS dialog allows a direct selection of the most common sample rates for audio and video. In addition, the sample rate can be changed completely freely and in real time using two sliders in the +/- 4% range.