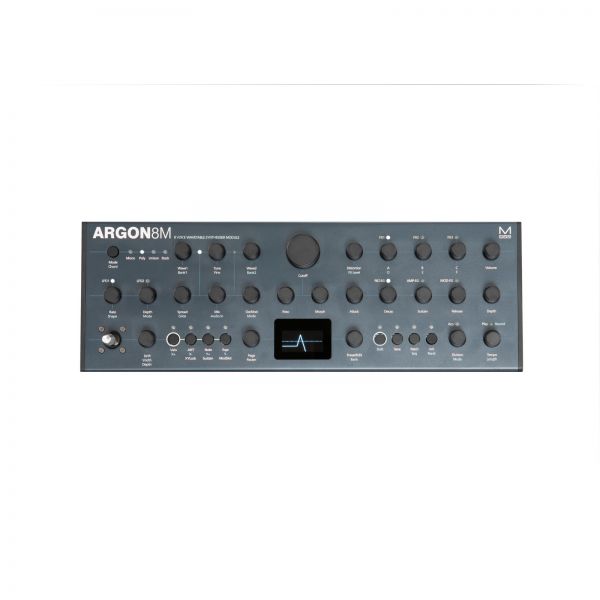 * Price incl. VAT
Use our payment method discounts to compensate
the differences between countries' VAT rates !

The Modal Electronics Argon8M is an 8-Voice Polyphonic Desktop Synthesizer with Wavetable sound generation. The Brushed-Steel surface, together with the High-Quality Controls, makes an obliging impression. Thanks to the OLED Screen, all important actions are always in view; even the Waveform is displayed in an Oscilloscope style. The Argon8M can be installed in a 19" Rack and comes with a pair of Rack Ears.

At the heart of the Argon8 are 2x high-resolution Wavetable Oscillators, which produce their sounds from 120x Wavetables organized in 24x Banks of 5x sets each. They are the same Wavetables used by the Modal 002 Synth. Oscillator 2 is also capable of classic PWM and 4-Noise variants. Wavetables are processed by 28x Processors are available on the Oscillator level, which are capable of Wavefolding, Wave Rectifiers and Bit-Crushing among other things, and thus represent an astonishing extension of the existing spectrum. 8x additional Oscillator modifications can be used for both Tone Generators, covering AM, FM, Ring Modulation, Hard Sync and others. The carefully generated sound is then processed by a resonant 12dB Multi-Mode Morphing Filter, which can morph continuously from Low-Pass through Band-Pass to High-Pass.

There is no boredom with the Argon8, thanks to the flexibly assignable Modulation Sources. In addition to the 3x dedicated ADSR Envelopes for VCA, VCF and Mod, there are 2x LFOs that can be operated either BPM synchronously or up to the audio range. An X/Y Joystick not only replaces the Pitch and Mod Wheels, but is also an independent Modulation Source. Any Modulations that are not firmly connected can be freely assigned in the Modulation Matrix. A total of 8x slots are to be occupied with 11x Sources and 52x Destinations.

100x Patterns can be found in the Argon8. Each Pattern can be up to 512x Steps (32 Bars) long and can record up to 4x additional parameters in the sequence in addition to the note information. An alternative to the Sequencer a highly developed, programmable Arpeggiator with 32x Steps does its job. With 300x Factory Pre-Sets and 200x User Patches, you have direct access to 500x Sounds. With the free Modal App the Instrument can be easily edited via iOS, OS X, Win7 (and higher) and Android 6 (and higher). The App also gives you access to other Modulation Sources and allows you to easily exchange Memory Locations or load new sounds.