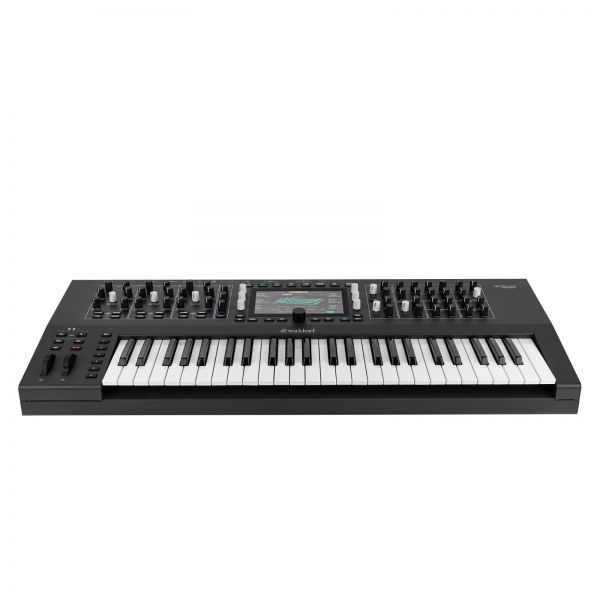 or +49 2595 963 9050
Description Videos 2
Description
The Iridium Synthesizer After introducing Iridium as a high-class synthesizer in a... more
Close menu
Waldorf Iridium Keyboard

After introducing Iridium as a high-class synthesizer in a compact desktop form factor we take the concept further forward with the Iridium Keyboard. It’s boosting an all-new 49-key FATAR TP/8SK semi-weighted polyphonic aftertouch pressure-providing keyboard as the first such implementation of that keyboard in the world, with an expanded front panel proffering one-knob-per-function control as a workflow-raising result of this high-class synthesizer’s palpable physical makeover, also allowing for six freely-programmable Macro buttons with which users can define functions from a wide range of features for additional performance control.

Tremendous tonal changes flow freely when playing the Iridium Keyboard live since polyphonic aftertouch is transmitted individually for each note played. Performers can conceivably play and hold down any number of keys simultaneously, subsequently moving each finger individually. In other words, individual keys are affected by the pressure applied by each finger, thereby creating, for instance, individual data streams for modulation purposes, whereas with monophonic (Channel) aftertouch all notes played will respond in the same way. With a powerful Mod Matrix offering 40 independent modulation assignments, each with individual settings for Source, Amount, and Destination, Iridium Keyboard comes with powerful modulation options — just like the Iridium desktop synthesizer namesake. Notably, Iridium Keyboard is also capable of processing MPE (MIDI Polyphonic Expression) data, duly making multiple parameters of different notes separately controllable to effectively enable it to behave more like an acoustic instrument in terms of spontaneous, polyphonic sound control.

Sounds from our Quantum synthesizer flagship can conveniently be loaded into Iridium Keyboard and vice-versa.

Iridium Keyboard — with its industrial design bearing the high-class hallmarks of Axel Hartmann — takes pride of place in the high-quality German synthesizer developer’s distinctive family tree as another direct descendent of the legendary PPG Wave synthesizer series that made their mark throughout the Eighties by bringing the distinctive sound of wavetable synthesis to the musical masses. Musically, though, the Iridium Keyboard — like its Iridium desktop synthesizer sibling — brings much more to the production table than its acclaimed ancestor, featuring five different synthesis models for each of its three oscillators (OSC 1, OSC 2, and OSC 3): Wavetable — a table consisting of single-cycle waveforms; Waveform (virtual analogue) — a standard oscillator model to create typical analogue waveforms; Particle (sampling and granular sampling) — allowing for extensive manipulation of sample-based sounds; Resonator — manipulates multi- samples from the internal (2GB) sample flash memory or noise via an exciter and various spectral parameters that can be modulated, matchless for generating awe- inspiring animated sounds and drones, which can, for example, easily be integrated into a Eurorack modular synthesizer environment via the Iridium Keyboard’s integrated control voltage connections (CV In1, CV In2, CV In3, and CV In4); and Kernels — effectively enabling one oscillator to become up to six sub-oscillators that can be interlinked through FM at audio rate and arranged in user-definable constellations.

Other fanciful features include three true stereo path digital filters per voice that convincingly cover all conceivable classic filter variants — various digital filters are additionally offered by the FORMER section, such as Comb, classic Waldorf high- and band-pass, and notch filters from our Largo and Nave software synthesizers, plus PPG models, alongside signal enhancer effects, such as Drive and Bit Crusher, and more; six envelopes, six LFOs, and much more besides are available for use as sources in the Mod Matrix, routable to almost any numerical value in Iridium Keyboard.

Connectivity-wise, the Iridium Keyboard communicates with the outside world, thanks to two audio inputs (for processing external signals); CV inputs as well as Gate In and Trigger In connections (for forwarding external signals to the Mod Matrix); Clock In and Clock Out connections (to synchronise with other gear); USB and DIN MIDI connections; USB Host port (provided for MIDI devices and also handling data exchange); Control and Sustain Pedals inputs; a headphone output (with dedicated volume control); and last, but not least, two audio outputs.